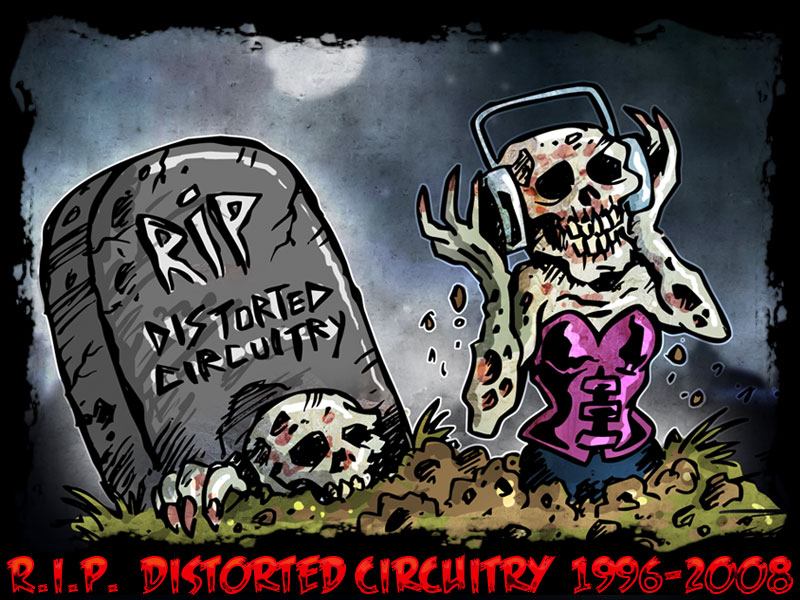 The January anniversary show marks 4 years since Distorted Circuitry first aired on RantRadio Industrial! It’s been a great run of delivering timely, up-to-date entertainment for the industrial music lovers of our small, yet world-wide scene! We’ve also been proud not only to be among a growing number of female DJs getting involved in industrial music, but also to have brought you a great variety of sub-genres and regular guest DJs to complement our broadcasts including DJ M from Italy, Antithesis of Storming the Base in Toronto, and DJ Flipps in Toronto. We hope you’ve enjoyed the shows!

The January 28, 2008 edition of Distorted Circuitry also marks the end of Distorted Circuitry. I began the show back in 1996 at CITR in Vancouver which is the college radio station station at the University of British Columbia back while I was in graduate school. I continued the show at WMEB in Orono, Maine while working at the University of Maine and met many great industrial music DJs there in my 5 years with WMEB. I went back in 2002 and guest DJed there with Matt Skaves who had taken over the reigns once I left.

When I moved back to Ontario and settled in Toronto, I was strongly encouraged and assisted by Dan Morgan of Moon Rock to start up an internet radio show to the likings of Distorted Circuitry in 2003. I did it! It began as a show on Future Pop Radio called ‘distorted.frequencies’ which I came up with as a variation on the original name because I was playing a lot more ‘future pop’ and ‘synthpop’, however, it did not take long before I revived Distorted Circuitry that year and made arrangements with RantRadio to continue my love of true industrial, while including other sub-genres on Distorted Circuitry in January 2004.

It only made sense to include the new friends I’d made frequenting the industrial clubs in Toronto and beginning to club DJ in 2003, so I invited Razorgrrl to co-DJ Distorted Circuitry with me, and the rest is history! I was buying CDs from Razorgrrl’s TiK Distro and had the chance to DJ club nights with her. I was also a regular customer of Storming the Base and had become friends with DJ Antithesis and his musical recommendations drove much of my favourites played on Distorted Circuitry. He became a regular guest DJ on the show.

It was with great pleasure we brought on board DJ M from Italy as well in 2005 – someone who had been in Toronto before I came, and seemed to have had many of the same friends as me, and so when we finally met, it was like we already knew each other. He has been a treasured colleague of Distorted Circuitry with his European flare. And soon after came regular guest DJ Flipps who had moved in the same circles of the Toronto scene and who was a regular at all of the club nights we all attended and DJed at.

Also in 2005 came the additional portfolio of the Regen radio podcasts for ReGen Magazine. DJ Morgana split up each Distorted Circuitry 2-hour show into 2 one-hour podcasts, changing the voiceovers, for Regen Magazine. Razorgrrl soon hopped on board and did guest podcasts from time-to-time along with Antithesis and others on occasion, and she eventually continued for DJ Morgana in May 2007 and continues to DJ for Regen Magazine.

2006 was the 10-year anniversary of Distorted Circuitry and I put together an anniversary show that included clips from over the 10 years and various stations I broadcasted for. It was fun to put together and I planned my exit which came in May, 2007. And now 2008 is upon us. Razorgrrl has done a fantastic job at running DC since I ‘retired’ but like the rest of us, she has many responsibilities that limit her time and together we decided that Distorted Circuitry has run its course.

All of us at Distorted Circuitry want to take the time to say ‘thank you’ to all of the bands we’ve played, and to all of the listeners for tuning in. We do hope you will tune in one last time to listen with pleasure to our final show on January 28th. Thank you for your support!

This entry was posted in Distorted Circuitry. Bookmark the permalink.