It was a pleasure to DJ at Burning Chrome! It got to play quite a few tracks I haven’t brought out since the days of T.i.K.! And Prospero put on a fantastic show!!! Thanks to Skeletalkitten and Synescape for having us! 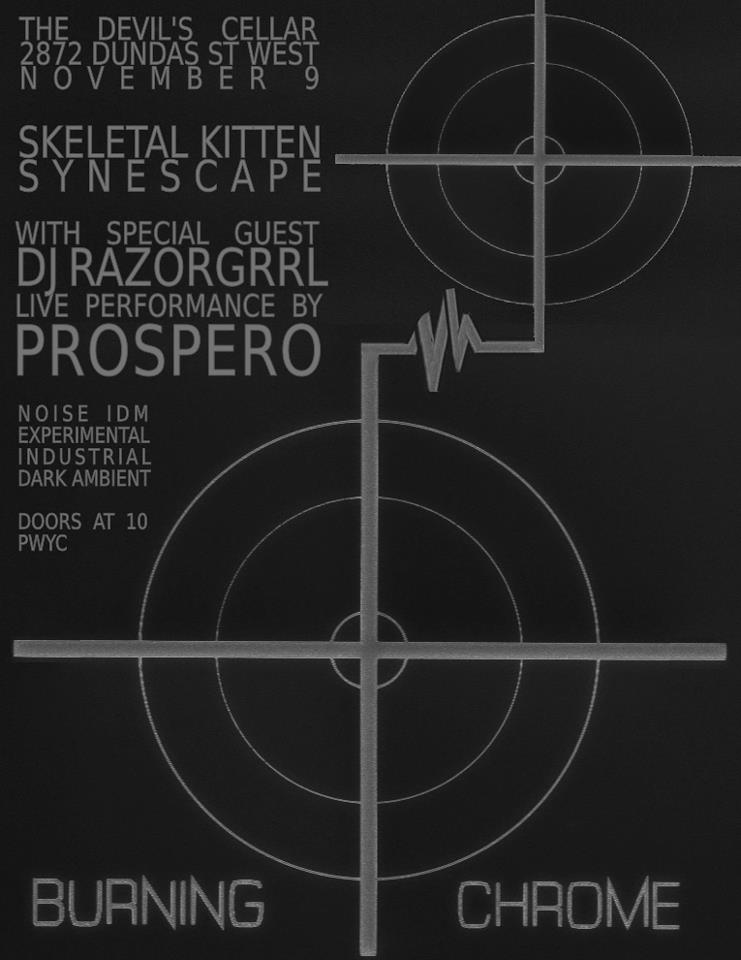 A SPECIAL EDITION OF BURNING CHROME

Featuring the crunchiest, gnarliest, most earth-shattering noise you will hear in this city.

Skeletalkitten and Synescape bring you a collection of experimental, IDM, power noise, bizarre beats and surreal symphonies that will tantalize your senses.

DJ RAZORGRRL
For over ten years, Razorgrrl has been a cornerstone in the Toronto industrial club scene. She was a founding member of the Toronto Industrial Kollective, working to expand its reach and influence into other branches—TiK Distro, TiK Recordings, the Saturation Bombing Festivals, and now works with record label Bugs Crawling Out of People. In 2004, she started producing the online radio podcast Distorted Circuitry with DJ Morgana, and moved on to become the Podcast Director at ReGen Magazine.

PROSPERO
Prospero is an industrial/rhythmic noise solo project by a long time DJ in the greater Toronto area.
He co-founded sub.session.records releasing A Storm Is Coming and subsequently a double CD entitled Spreading the Infection, was released in 2004 as a split release with France’s brume records. Prospero has contributed tracks to a number of compilations, including Sub.Session and Duo.Tone released by sub.session.records; Saturation Bombing I and II and [tik]co:man:d[sic] by TIK Recordings. He has remixed tracks for other notable [rhythmic noise] artists such as Empusae, s:cage and Converter.

This entry was posted in Event Playlist and tagged burning chrome. Bookmark the permalink.